Time was running out. Dumbledore knew he would have to face his childhood friend, his nemesis soon, but he needed information from the inside to ensure the final battle was success.

Katrina Bagshot thought she was applying for a secretarial position at the British Ministry of Magic. Instead she finds herself pulled into an intriguing web of espionage where loyalty if a matter of life and death and everyone is an enemy.

Thank you to Oregonian for nominated this fic for Story of the Month. I've actually finished it and will be posting every week or so. 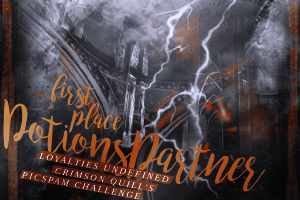 award by the amazing Crows4bros

A Season for Wallflowers by prideofprewett
Original Fiction

banner by the author

With everything in life, there is a season for change.

Maria Wynstone is mostly content living a quiet life at her family's country estate ever since an incident during a previous Season left her reputation tarnished. But as the daughter of a gentleman farmer, a few bad seasons can make all the difference to one's circumstances. Reluctant to return to town, Maria discovers that she has little choice when she receives a letter from her brother’s commanding officer that he has been discharged from naval service. Maria must embark on a journey to London, should she wish to not be a burden to her family and to also uncover the truth about what happened to her middle brother, Gerry.

Arthur Colbourne does not mind the law per se, but an embarrassing bumble in court rattles his confidence to the point where he questions all he's ever worked for. However, when his uncle unexpectedly dies and he inherits his estate, Arthur finds himself thrust into a role that he is quite underprepared for, particularly when he meets the daughter of his new neighbour, Miss Maria Wynstone.

Drawn to her quiet charms and wit, Arthur finds himself feeling things he's never experienced before. And when Maria receives startling news about her brother, Arthur cannot help but offer his services to help her find the truth of what happened to him. As the hunt for Gerry reaches a critical turning point, both Maria and Arthur are confronted not only for their growing feelings for one another, but also ghosts from their pasts. They must then find a way to move beyond their individual failings, should they want to succeed together.

Curious things live within the pages of books, and curiouser things live in the woods from whence those pages came.

Kikian Dethael is a librarian for the Zenith Library in Crestvale, when an adventurer stumbles in, asking for help with her research and her entire world shifts.

A fantasy story set in the Kingdom of Syla with a rag tag group of 20somethings who are as dysfunctional as they are heroic. Lena, our heroin, has a powerful connection to runa, the energy that flows through every living thing. So much so, that she can get tangled with the energy of people who get in its way. Since she was little she's often had dreams of these strangers in their last moments and now steps in to warn them if she's able to track them down. There's only one face from her dreams that has ever appeared more than once, in fact he's followed through her dreams like a shadow.

And now that person is standing in front of her while she's wide awake.

stay with me by singmetothesun
Original Fiction

Hospitals are all too familiar to them and they hate it.

In this Darkness by quill2parchment
Harry Potter Universe

There was darkness, and then there was her.

Call It What You Want by RogueSlytherin
Harry Potter Universe, Next-Generation (2009-2040)

Lily is back in London after years abroad and trying to put her life back together.

Scorpius is making that difficult.

The Crofter and The Snake by Oregonian
Harry Potter Universe

The year is 1997, and an order has gone out from the Ministry of Magic that all students between the ages of eleven and seventeen who were formerly taught at home must now present themselves for attendance at Hogwarts School of Witchcraft and Wizardry.

Howard Sutton, the seventeen-year-old son of sheep crofters on the Isle of Skye, who formerly received his magical education at home, arrives at Hogwarts at the beginning of what will be the calamitous school year of 1997-1998.  The Sorting Hat says, "It's not a matter of which House you need, but of which House needs you."  What can a crofter do for Hogwarts?

Everything deepens and the intensity rises as we move into Part 2! Things get hot between Liam and Gillian. Ben is drawn into a complex game with the girls of the Little Coven. Aiden makes a decision that will impact the rest of his life. All this and more, plus - the desperate search continues for the forbidden book, Wicked Vengeance. Can Professor Gregor and the prefects find it before Reginald Dennison, the budding Lord Mahglin, strikes again?

I have made adjustments to the story to bring it into compliance with Teen Rating Standards.

Book Six in the series Wren of Hufflepuff

Sebastian is the only son and heir to the Rosier legacy with little interest in inheriting the business empire. Imogen's just earned the wizarding world's ire for (allegedly) breaking up its favorite celebrity couple. These two old friends stumble into a fake relationship and agree to break it off after the winter holidays...And knowing things are certain to end means there's no reason not to indulge in a few benefits along the way...right?

Percy queues for doughnuts and meets someone from his past. It’s not at all unpleasant, but simply, a wonderful time.

For Felpata_Lupin’s “fan of your fanfic challenge.”

When Evanora Perrot accepted the position of Hogwarts Head Librarian she expected enchanted books, student study groups, manuscript refurbishment, late nights pouring over the catalog, and only leaving the library to watch quidditch games and filch food from the kitchens.

She did not bargin for Albus Potter and his many exploding cauldrons.

The Djerrkura Islands, commonly referred to in her field as The Djerrs.

An expedition to investigate a decline in an endangered species leaves six scientists without a way home. Victoire Weasley needs to figure out what went wrong. Before it happens again.

Tiramisu is the name of an arctic fox who was brought to medieval England by an Italian trader and left at an abbey in Cambridgeshire to be the pet of two young boys who had been placed in the abbey by their families.  Set in the disastrous Fourteenth Century, this is the story of one of those boys, Martin, who had to endure what no fifteen-year-old should have to face--calamity. loss, grief--but also a story of friendship, survival, spirituality, and ultimately a connection to canon.

Written for the Bookshelf Challenge of Bex (Beyond the Rain).  The random quote prompt, "I started to step out of my clothes as Tom leaned against the doorframe," is from the book Queenie by Candice Carty-Williams.  My eternal thanks to Bex for giving me the impetus to write this one-shot that grew into a novel.

Winner of the 2020 Golden Ink Award for Most Creative Story.

A series of drabble-style chapters about Cho Chang’s life and gratitude.

Hanging on a Wandtip by BellaLestrange87
Harry Potter Universe, Next-Generation (2009-2040)

Lily Luna Potter has done it. She is finally hired as an Auror and completes her training without any issue. She doesn't, however, expect to be assigned to a task force investigating a murder of a former Azkaban prisoner who skipped out on probation.

She also doesn't expect the case to involve people she thought were stuck firmly and immovably in her past.

For RogueSlytherin’s I'll Read Fluff If I Want To challenge

Drabbles 1-15 were for the challenge. Drabbles 16 onward are just for funsies.

one week. one cabin. sexual tension. only one bed. lots of shenanigans.

"Someone learns something unexpected about his ancestry and acts upon it."  That was the challenge for a 700-word HP drabble that grew from a drabble to an 8,000-word story to a 120-page screenplay, evolving along the way from Draco-Astoria-Scorpius Malfoy to Denis-Aurelie-Silvestre Paridelle, but the HP clues are still there, discernible to a knowledgeable eye.  Can you spot them?

The original drabble ended at Plot Point One, where Scorpius/Silvestre says, "If you don't open them, then when I'm an old man and you're dead, I will do it.  So we might as well look at them now.  Don't you want to know?"

vic and gallagher definitely didn't wait until the wedding, but the engagement thing is apparently kind of a turn on.

To Know Your Heart by prideofprewett
Bridgerton

There is freedom in knowing what’s in your heart. There is comfort in knowing you are not alone.

random drabbles about victoire and gallagher.

Elara Avery was entering her seventh year of Hogwarts with a broken engagement to a dangerous man, the threat of expulsion held over her head by her extortionist Headmaster, and the expectation that she either be engaged or prepared to join the "family business" by Christmas. All of this because of one fateful night where that idiotic fourth year helped the Dark Lord rise again and inadvertently ruined all of Elara's most well laid plans. With the help of friends new and old, a turncoat potions professor, and a certain devious redhead she might  just be able to graduate keeping everyone satisfied...

James just wanted to get away from the pressures of the wizarding world for a summer. Falling for a muggle wasn't meant to be on his syllabus.

Incredible banner made by aurevoir

It isn't every day that Percy Weasley falls in love. But when he does, they always end in Y.

A collection of 30 drabbles/ flash fiction about Percy's loves (or some very close calls) -- from Penny to Audrey and everything in between.

For RogueSlytherin's I'll Read Fluff If I Want To Challenge